We’re all in this together, after all.

Passover preparation this year was interrupted by horrible news: on Sunday, April 13, three people were murdered just outside Jewish institutions in Overland Park, Kansas. From the news reports, it seems likely that a notorious anti-Semite chose that day to terrorize Jews.  Children were terrified. Three innocent lives were taken.

Here in the United States, this event was big news and the response was exactly what we would hope for in such a situation. Law enforcement rushed to the scene, and determined that the murders were indeed a hate crime. The President, religious leaders, and civic leaders rushed to the microphones to denounce the evil acts. The news services interviewed speakers from the Southern Poverty Law Center, the Anti-Defamation League and local synagogues. All the public voices agreed: the acts and attitude of the murderer stand completely outside the law and the public will.

We have reached a point in American history where it is assumed that violence against Jews and people who spend time with Jews is a bad thing.

Unfortunately, while we have made progress in this area, others still suffer under the assumptions that they are less than human, dangers to society, or are “asking for trouble” simply by being who they are. According to the National Coalition of Anti-Violence Programs, more than half of all victims of anti-LGBT hate crimes in 2012 were transgender women. Transgender women of color are especially at risk of violent attacks. For example, Islan Nettles, a young trans woman who had worked her way out of homelessness and was looking towards a bright future was beaten to death by thugs on the street.

I had dinner with a young trans activist last week, to find out how things were going at the nonprofit where he works. He told me that he is haunted by all the murders, that every week brings word of more violence against trangender people.

And then there is the violence that isn’t categorized officially as a hate crime, because it originates in the legal system itself. Last May, Monica Jones was arrested on the street in Phoenix, AZ, when police profiled her as a sex worker because she was a trans woman of color walking on a public street. She was given a choice of a Christian “prostitution diversion” program or to be tried on charges of prostitution. Never mind that she isn’t a prostitute. Never mind that she is a student in good standing at Arizona State. Never mind that if sentenced, she faces placement in a mens’ jail where she is almost certain to be the target of violence. An Arizona judge convicted Monica of “manifesting prostitution” which means she fit the profile: in her case, she was accosted by police for “looking like a prostitute” and then she asked them if they were police. That is her “crime.”

There was a time in America when ignorant people felt free to ask Jews about our anatomy (“Have horns? a tail?”) a time when Jews were assumed to be deceptive, a time when Jews had to fear violence on a daily basis. There are, sadly, people who still hold to anti-Semitic beliefs and who act on those beliefs. But when the chips are down, as they were in Kansas this past week, American Jews can depend on the system for justice.

Transgender people face intrusive questions about their anatomy anytime, anywhere: “What surgery have you had?”  “What do your genitals look like?” They are assumed to be deceptive: “He used to be a woman!” “She isn’t a real she!” They are acceptable targets for jokes, for violence, and for ridicule in too many venues. However, the sad fact is that trans folk cannot depend on the system for justice; sometimes our law enforcement and legal systems are the source of injustice.

We’ve been there. We know what it is like to be despised outsiders. This Passover, let’s mobilize our resources to fulfill the commandment:

You shall not wrong a stranger or oppress, for you were strangers in the land of Egypt. – Exodus 20:21.

We Jews are still targets of violence. We are still misunderstood and oppressed by the majority culture at times. We could take our anger and fear and turn inwards. But instead we have the choice to obey the commandment and turn outwards, to reach outwards, and take the hands of those who are still labeled as strangers in our society. We are commanded to challenge bigotry and ignorance. We are commanded to speak up for the stranger. Because we know what it’s like.

I wish all our readers a zissen Pesach, a sweet Passover, an energizing festival, empowering us all to work for justice.

Matzah is the paradox
at the heart of Passover.

At the center of our Passover feast,
this poor bread, lechem oni, scatters crumbs everywhere.

We place it among mounds of food:
poverty in the midst of plenty.
Now who among us has seen that?

Surely God called us out of Egypt
For something better.

I must admit that as a child and even a teenager, I didn’t really like the holiday of Passover. I saw it as a time in which I had to give up something I loved. A week without pizza, cookies, and even pasta? How could it be a holiday if I felt like I was being restricted- if I felt like I was giving something up? Shouldn’t holidays increase your joy, not make life harder?

But then one Sunday as a teenager my entire outlook on Pesach changed. About a week before Passover, I went to a youth group event unlike one I had ever attended…it was a “Chocolate Seder.”  We had a mock seder and almost everything was made of chocolate. 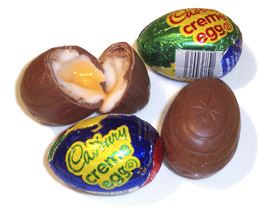 This is my favorite type of egg!

Instead of four cups of wine, we had 4 cups of chocolate milk. Instead of bitter herbs we had bittersweet chocolate. Instead of dipping parsley in salt water, we dipped strawberries in chocolate sauce. Instead of a roasted egg on the seder plate we used a Cadbury’s chocolate egg. Instead of a meal we had an ice cream sundae. I’ll admit it wasn’t the healthiest of events, but it felt like one of the first times I saw the joy in Passover. By eating fun foods and even using a crazy chocolate-themed Haggadah, I was able to see Pesach in a whole new light.

Ever since the chocolate seder, I have seen Passover as a time for freedom not restrictions. I have seen Passover as a true celebration. Yes, we give up chametz (bread products), but what we receive in return is far greater. By spending one week to give something up we allow ourselves a chance to remember the enormous sacrifice of our ancestors. In our small sacrifice of not eating bread for only one week, we acknowledge and give thanks to God for the miracle of our freedom. And more than that, we give honor to all of our ancestors- to all of the Jews throughout the centuries. Our mere practice of having seders and following the laws of Passover is a statement that says our faith-our religion-our Judaism is something for which we should make sacrifices.

A seder plate made of chocolate you can buy online!

In the years since I was a teenager, I’ve often had “chocolate seders” with my students in the hopes that they too will learn to see Passover as a time for celebration and not merely restriction. However, even without chocolate, I believe we can focus on the real meaning of Passover- the real meaning of freedom and liberation.

May this Pesach be one in which we truly are grateful for all that we have- even if we have to make a small sacrifice to acknowledge that. May we celebrate our freedom and celebrate Passover in the hopes that one day- all the people of the world will be free, as well! Chag Pesach Sameach- Happy and Healthy Passover!

Rabbi Emily Ilana Losben-Ostrov is the Rabbi at Sinai Reform Temple in Bay Shore, NY, where her congregants are begging her for a Chocolate Seder.

Last month, on vacation, I spent a morning taking a perfume class. I  had looked forward to this for over a year. The experience was everything I hoped it would be. It was creative, fun and educational. It was challenging – there were so many oils to chose from and so many scents to sample in the process. When the morning was over, I had a bottle of my own perfume – a special, spicy fragrance.

Part of the challenge of making my own fragrance was choosing the premixed base to begin with. The images they evoked for me when I sniffed them were varied and surprising. One base reminded me of old bureau drawers. It wasn’t musty but it had that “furniture that has been in the family forever” scent. Another one made me think of hummingbirds. This was a light sugary citrus smell, and I could just imagine birds flittering around in response to it.

My final product, the one I bottled and brought home, included cranberry. Did I chose that scent because it is the state berry of the Commonwealth of Massachusetts and very familiar to me? Do we respond more strongly to fragrances that relate to where we live or where we grow up?

As I reflected on my experience, it occurred to me that three of the fragrances I had played with that morning – rose, almond, and cinnamon – are smells that I associate with Passover. I joke that I won’t buy Passover foods until after Purim, but it seems that once Purim has come and gone I also begin to think of Passover scents. The rose reminded me of the rosewater in the pistachio macaroons I make each year. The almond carried the memory of almond macaroons and the cinnamon reminded me of the charoset.

And then I began to wonder – I know what Passover smells like, but what is the smell of freedom? Is it the combination of scents associated with the places we vacation – pine trees and woodsmoke for skiers; salt water and sunscreen for those of us who go to the beach? Is it the smell of fresh laundry or a clean room? Is it a scent that makes us feel safe, secure, and protected? What does freedom smell like?

The Israelites wandering in the desert complained that they missed the food of Egypt. Studies show that our sense of smell is an intrinsic part of how we taste food. Did the Israelites also miss the scents of Egypt? The Torah and Midrash speak of the taste of the manna that the Israelites ate in the desert. We learn that its taste changed according to the desires of the eater but the only reference to the smell is that the leftover manna stank. Perhaps for the Israelites who left Egypt the smell of freedom was the smell of rotted manna. For them freedom’s smell did not evoke positive memories. Maybe the 40 years of wandering were necessary not just for  a new generation that did not experience slavery but for a generation for whom freedom had a positive scent.

May we all be blessed this Passover with scents that evoke happy memories, create connections to our past, and remind us of the gift of freedom.

(With thanks to John and Cyndi Berglund and Tijon – for a fantastic vacation experience and for giving me so much to think about.)

Rabbi Julie Wolkoff, D.Min, CT, is a hospice chaplain in Massachusetts and a past co-president of the WRN. Find her at: http://fabricfiber.wordpress.com/